“Local Voices at a Crossroads” is an article series in which local actors of everyday peace share their insights into the fragilities and resilience of their societies in the face of conflict. Grassroots societies lie at the crossroads between local realities and national peacebuilding policies and practices. The series therefore aims to accelerate action at the local level by strengthening the voices of civil society at the policy level. “Local Voices at a Crossroads” is hosted by the Civil Society Platform for Peacebuilding and Statebuilding (CSPPS) and emerged from a collaboration with the Political Settlements Research Programme (PSRP*), based at the University of Edinburgh. This post was originally published on CSPPS.

For the first part of the series, we focus our attention on Syria, building on a research project supported by the Covid Collective and led by Juline Beaujouan: the impact of COVID-19 on local peace-making in Syrian opposition-held areas. Beyond Syria, the article series will expand its scope and coverage to other context to reflect the mosaic of perceptions and experiences of everyday peace around the world. 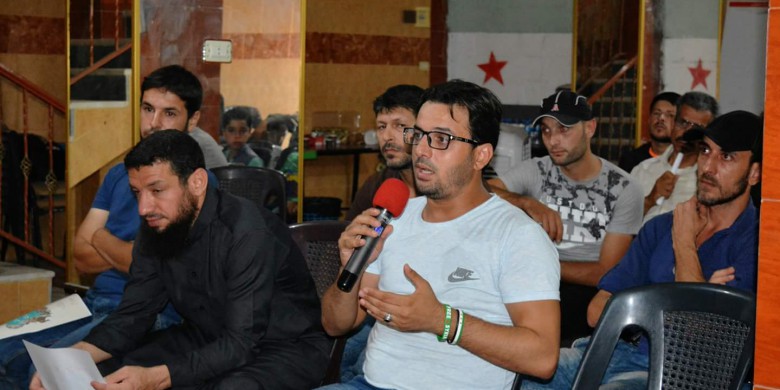 Meeting held in Idlib governorate for community cohesion and mediation between the internally displaced from Ghouta and residents in Saraqib. Photo: Abdulah El hafi

Local reconciliation committees have always existed in Syria, reflecting the importance of traditional, tribal customs and laws in the country. Since the outbreak of the civil war in March 2011, these institutions have only gained in importance and experience. In order to better understand the nature, roles and impact of these committees on areas where the rule of law is absent for almost 10 years, we interviewed members of several local reconciliation committees in Idlib governorate between July and October 2020.

Between traditional justice and peacebuilding

Following Russia’s formal decision to intervene militarily in the Syrian conflict in December 2015, the Syrian regime and its allies achieved significant military gains at the expense of insurgent and rebel groups. In light of these developments, local reconciliation committees emerged as bridges between the regime’s military forces and local communities to set up a framework for negotiations on conflict de-escalation and peace agreements.

Yet, in the ‘reconciliated areas’, back under the Syrian government’s watch, these committees were criticized for their lack of genuine commitment to peace. Rather than bringing forth initiatives to address the causes of conflict and to initiate reconciliation, they were accused of being tactical tools in the hands of the Syrian regime and its allies, Russia and Iran, as a means to place the conflict further away from urban centers and to secure control over strategic areas and resources. The contested legitimacy and authority of these committees – predominantly led by local notables with strong economic networks, is perceived as an additional and serious impediment to the restoration of social capital and durable peace.

In northwest Syria, which remains under the control of rebel groups, local communities developed similar strategies for daily conflict management; with seemingly different results. While Russia, Turkey and Iran keep the upper hand on negotiations directly related to the Syrian conflict, and in the absence of a judicial system, rule of law, nor a recognized government, local reconciliation committees took on the difficult mission of mediating between all parts of society, providing crucial ties between the de facto Salvation Government, armed groups and civilians.

In Idlib governorate, which is traditionally characterized by strong tribal presence, tribal and religious leaders, but also activists assumed a central role in local reconciliation committees and conflict management initiatives. Similarly, the military became a key stakeholder of local conflict de-escalation in terms of law enforcement and protection of civilians.

IDPs regularly face discriminative treatments and conflicts with local residents over the access and use of land, scarce resources and humanitarian aid. Those quarrels are indirect consequences of the wider conflict and are only aggravated by a volatile environment.

In this sense, local reconciliation committees are opportunities to regulate violence and circumscribe potential misuse of force. For instance, in several localities, local committees negotiated the erection of military checkpoints at the entrance of villages and towns to enforce the demilitarization of civilian areas. In general, because their composition reflects the demographic characteristics of the areas in which they intervene, local reconciliation committees provide the representation that lacks at the level of the region’s de facto government and political institutions.

In Jisr al-Shughour, a city located 50 km west of Idlib, the head of the political committee estimated that local reconciliation committees solved about 75% of local disputes. He explained that “as the demographic environment changed, conflicts arose because in-coming individuals [internationally displaced persons] would not understand the nature and customs of our area; reversely locals would not welcome them due to security conditions.” While the city welcomed a few thousand Turkic Muslim settlers, 50 to 90% of the city’s population was displaced in 2019 because of intense fighting.

Jisr al-Shughour is not an isolated example in northwest Syria. IDPs regularly face discriminative treatments and conflicts with local residents over the access and use of land, scarce resources and humanitarian aid. Those quarrels are indirect consequences of the wider conflict and are only aggravated by a volatile environment. In this context, local reconciliation committees provide an inclusive platform for dialogue, thereby diffusing tensions and protecting the most vulnerable communities in this war-torn society.

The Syrian government’s lack of commitment to non-violent conflict resolution and human rights is seen as the main obstacle to sustainable peace in Syria.

One way to do so is to provide platforms where communities meet and work together for the public good. For instance, when it comes to the demilitarization of an area. In the context of protracted conflict that witnessed the advent of military rule, these committees empower civilians and help them retain control over their cities and institutions. In this regard, the PA-X database,hosted by the University of Edinburgh, records several ‘neutralization’ agreements negotiated by local reconciliation committees. This is also the case of an agreement negotiated by the people of Maarat al-Numan and the Islamist armed group Tahrir al-Sham in January 2019, in order to prevent the latter from installing its headquarters in the city. Doing so, the local reconciliation committee managed to protect civilian areas and inhabitants from becoming a target of the Syrian regime. It thus contributed to increased safety, which is a powerful driver to trust, social cohesion and eventually, durable peace.

The impediments to local conflict management

Local reconciliation committees are key guarantors of local social peace in northwest Syria. Yet, their effectiveness lies in the military and Salvation government’s willingness to negotiate, to help implement decisions, and to recognize civilian initiatives in the region. This fragmentation of authority and legitimacy is deepened by the absence of a central authority, an independent executive force and a set of laws that would apply to all. On the financial side, local reconciliation committees lack independence: they often rely on the aid of external donors who are not necessarily seen as neutral in the Syrian conflict. Finally, and more importantly, northwest Syria is still in the cross hairs.

The Syrian government’s lack of commitment to non-violent conflict resolution and human rights is seen as the main obstacle to sustainable peace in Syria. But some are still hopeful that “once a political solution is achieved – or rather imposed –, there will be a great need for reconciliation committees to rebuild bridges between Syrians who have been turned against each other for the past decade. We must rebuild the trust that has been eroded during the war”.

Juline Beaujouan is a Research Associate with the Political Settlements Research Programme (PSRP), based at the University of Edinburgh, where she researches local conflict management and trust-building in Lebanon, Iraq and Syria. Juline received her Ph.D from Durham University where she was awarded the al-Sabah doctoral fellowship and acted as a member of the AHRC’s Open World Research Initiative (OWRI). Juline is the co-editor and contributor to the volume Syrian Crisis, Syrian Refugees – Voices from Jordan and Lebanon, and co-author of Islam, IS and the Fragmented State: The Challenges of Political Islam in the MENA Region.

Eyas Ghreiz is a researcher and consultant in areas of human rights and development. Ghreiz is also a Master student in International Development, specialising in conflict, security and development, at the University of Birmingham, UK. Ghreiz has over eight years of working experience with international NGOs, and UN bodies in Jordan, Syria, Turkey and Yemen. He has published several articles in both Arabic and English and contributed to the book Syrian Crisis, Syrian Refugees: Voices from Jordan and Lebanon, published by Palgrave Macmillan in both English and Turkish, and will be published in Arabic soon.

Abdulah El hafi co-founded and managed the Unified Relief Office in Eastern Ghouta and sat on the board of directors for two years. In 2013, he was a founding member of the Civil Defense in Eastern Ghouta in Rif Damascus. From 2014 to 2019, Abdulah worked as a coordinator and field manager for several programs funded by the British DFID and USAID. He also delivers trainings in the field of good governance and capacity building for several local organizations, teams and councils in Rif Damascus, Idlib, and northern Aleppo governorates. Currently, Abdulah is working as the manager of the Local Administrative Councils Unit (LACU).

*The Political Settlements Research Programme is a partner of the Covid Collective. The Collective brings together the expertise of UK and Southern-based research partner organisations and offers a rapid social science research response to inform decision-making on some of the most pressing Covid-19 related development challenges. The PSRP and Covid Collective are supported by the UK FCDO.

Political Trust and Social Cohesion at a Time of Crisis: The Impact of COVID-19 on Kurdistan Region-Iraq

The Impact of COVID-19 on Peace and Transition Processes: Tracking the Trends